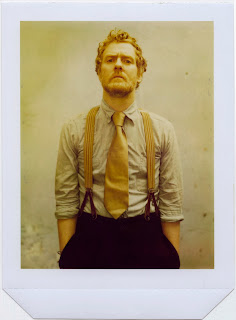 Typically December is a slow month for new music, with the plethora of "Best Of" lists having to tide us over until after January. But thanks to Glen Hansard (and his label, Anti-, who isn't afraid of an off-beat release time), we're getting a little taste of something new to break up the monotony of holiday music with the release of his 4 song EP, "Drive All Night."

While four songs isn't nearly enough, it's a solid, high quality four songs including a stellar cover of Bruce Springsteen's "Drive All Night" with Eddie Vedder and Jake Clemons. And, in the spirit of the holiday season, a portion of the sales for the full EP will go to Little Kids Rock, a charity championed by Clarence Clemons.

While the "Drive All Night" cover is a massive highlight (check out my write up for Cover Me Songs here), the other three songs are right up the alley of any Glen Hansard-slash-Swell Season-slash-The Frames-slash-good music in general fans. "Pennies in the Fountain" is a melancholic tune with a softer, lilting vibe; "Renata" is a soulful cry of a song that highlights Glen's musical diversity; and "Step Out of the Shadows" is a crystalline a capela ballad. The highlight, though, is still "Drive All Night"- it's everything we love about Glen Hansard's music, with a little help from his friends.

"Drive All Night" is available now.