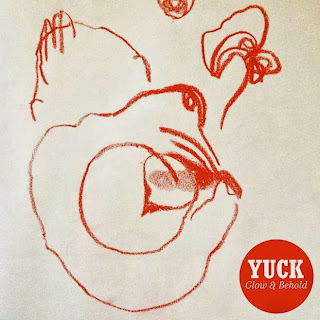 When I first heard Yuck in 2011, they were the perfect mix of retro distorted sounds, melancholic slow jams, and harder driving beats. Then lead singer Daniel Blumberg announced he was leaving the band, leaving me to believe that one album was all we'd be getting from Yuck.

After Blumberg's departure, however, the remaining band members forged ahead, making music and now releasing a new album ("Glow and Behold"out 9/30).

A shakeup in band members can signify a shakeup in direction for a band, and this seems to be the case with the 'new' Yuck. "Glow & Behold" is decidedly less distorted, certainly more even keeled, and definitely more produced (not hard given that their debut album was recorded in a bedroom). There is much more variation on this album, with everything from horns to acoustic guitar to a 50's pop vibe straight out of "That Thing You Do"(on "Nothing New"). While there are hints of the heavy guitar distortions we all loved so much off their debut album (especially on "Middle Sea"), they seem to take more of a backseat on this sophomore effort. There's still a nostalgic undercurrent throughout, but it's not so focused on one era, one sound, or even one genre.

With less of the distinctive, crunchy, raw distortions that they showcased on their debut album, Yuck is ensuring with "Glow & Behold" that they aren't pigeonholed. It's an album with a much more mature, developed sound that at first listen had me wanting more of that distortion and rawness, yet I've found myself listening to it over and over with the same affinity I had for their debut album. Check out tracks like "Lose My Breath,""Memorial Fields,""Middle Sea," "Rebirth," and "Glow Behold."