After seeing over 20 bands in a 4 day span at SXSW, there were a few in particular whose performances really stood out.  Many were bands I'd heard of but hadn't paid much attention to, but thanks to the beauty of live music, I was introduced (and in some cases, reintroduced) to certain bands and artists I now can't stop listening to. Here are some highlights.


Night Beds
I haven't stopped talking about Night Beds since...well, basically since the sound of Winston Yellen's voice graced my ears.  They were the first act I saw at SXSW, and I decided then and there that regardless of what I saw the rest of the week, it was worth the trip. 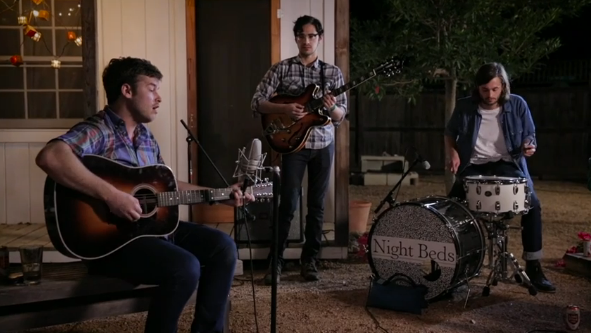 Diiv
Diiv and Local Natives were both bands I wasn't much into prior to SXSW, but seeing them live quickly changed my mind when they performed great sets at the Mohawk outdoors.  A live performance can somehow make your ears hear things you don't hear on an album or a recording, and I quickly realized what I'd been missing.

Lord Huron
Lord Huron performed at the Spinner showcase at The Moody Theater at ACL Live, in a stellar show where they highlighted their folk pop chops in a clean sounding live set.

Natalie Maines
Natalie Maines is releasing her solo debut on May 7th, and performed at the Spinner showcase after Lord Huron, where her amazingly strong and clear vocals were in the spotlight.  While always knowing she had a fantastic voice, her solo performance was an exercise in illustrating just how strong they are, especially on a cover of Pink Floyd's "Mother".  With the help of Ben Harper and her own dad, Lloyd Maines, she tore through her set with sincere emotional rawness, raising goosebumps throughout the theater.


Phosphorescent
Phosphorescent's new album Muchacho is out now, and Matthew Houck played tunes from it a few times at SX, where I caught him at a venue called Red 7.  He performed a stirring set, bringing the ethereal vibe of Phosphorescent songs into real life.

Dawes
The new Dawes album isn't out just yet but that didn't stop them from performing some new tunes, teasing us a bit with what's to come when Stories Don't End comes out April 9th.  A solid throw-back rock outfit from LA, Dawes is becoming more and more recognized for the lyrical abilities of frontman Taylor Goldsmith.  With a sound straight out of a Jackson Browne album and an LA canyon, its the songwriting that stole the show for me- lyrics often get lost in live performances, but they seemed to be on full display when I caught them, giving reason to pause and just listen..


The Airborne Toxic Event
I've always wanted to see The Airborne Toxic Event live, because I knew that a band with that much raw emotion on a recording would kill it live. And kill it they did. They brought an insane energy and emotional honesty that had everyone in the place jumping and singing with fists raised.  One of my favorite performances of the week. We're still waiting for their new album, but they recently released a 4 song EP (The Secret) to tide us over until the full album comes out.