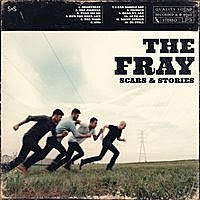 I first sat down to listen to the new album by The Fray, Scars and Stories, with a school kid giddiness that doesn't often come around for me with an album release anymore.  A huge fan of their first and sophomore efforts (How To Save A Life from 2005 and The Fray from 2009),  I was quite happy with the first single off Scars and Stories, "Heartbeat" and I assumed that we'd be in store for more on the new album- more of Isaac Slade's beautifully emotive vocals, more piano-driven tracks, more despondency that is the mark of The Fray.

At the same time, I also wondered how a band like The Fray, whose sound is so particular, would manage to evolve.  Perhaps the band was wondering the same thing when they received the recording budget for their new album and opted to use some of it to travel- to tap into that sense of Wanderlust and see different places, meet different people, and translate that info into fresh, new music.  Tracks with titles referencing places, or events in other places pepper the album ("Munich", "Rainy Zurich", "1961").  In the below Vevo interview, Isaac Slade tells the story of going to Rwanda and how this affected his songwriting, particularly on the first track and first single, "Heartbeat":


"Heartbeat" is classic Fray- the tempo, the tone, the building crescendos, the earnestness in the lyrics and the boldness of the vocals.  It whets any Fray fan's appetite and leaves a nice satisfied feeling, licking our chops for more like it on the rest of the album.

Occasionally, we can lick our chops.  But occasionally, we are also left wondering what was just put on the plate in front of us.  On certain songs off Scars and Stories, The Fray seem to want to continue their evolution as a band without abandoning what makes them a band, creating a logical next step or layer in their sound.  But the album also misses this evolution on songs throughout, creating a disjointed album that sort of satisfies, and sometimes, sort of doesn't.

Songs like "Run For Your Life", "I Can Barely Say", and "Be Still" are standouts that are fresh yet true to The Fray's formula.  "48 To Go" also walks tightly towards this formula, and is probably the most radio-friendly on the album- don't be surprised if it is the next single.  Lyrically, its based on a road trip to California Slade took with his now-wife when they were first getting to know each other.  Being so enamoured with each other, the story goes, they kept pulling over to 'make out', eventually losing their sense of place and suddenly finding themselves 600 miles off course and not far from Juarez Mexico.  Its a simple song about the excitement at the beginning of a relationship, but The Fray manage to put it into liquid emotion for anyone who remembers or knows what that feels like.

But then, occasionally, the album begins to sound like someone else, particularly teetering on sounding like The Script, as on "The Wind" and especially "Rainy Zurich" which has band member Joe King taking lead vocals.  He sounds amazing, but also sounds eerily like Danny O'Donaghue from The Script.  Then,  "Turn Me On", manages to sound a bit like a Maroon 5 type of groove, with Isaac Slade using that gorgeously emotive voice of his to sing lyrics like "The way you're moving, you turn me on; I want to touch you till we're burning, you turn me on".  It creates an awkward moment on the album, as though there is an attempt to turn the passion Isaac oozes so easily into something that somehow cheapens it- made even more obvious by the transition to the next track, "Run For Your Life", a lovely, serious track with Isaac singing in his trademark fervor.

The band has gone through an evolution - notably that on some tracks the simple, piano-driven tones have given way to a more instrumentally produced sound, something that began on 2009's The Fray.  On some tracks this provides musical support to live up to Isaac Slade's vocals, but some fans may find disappointment in the more produced sound.  They border on overdoing it a bit now and then, yet somehow manage to pull it back before plunging completely to 'the dark side' of production value.  This may not be enough, however, for fans looking for that particular sound The Fray is known for- a bit on the stripped down side, a bit raw, always sincere.

The last track on the album, "Be Still", offers up a final haunting requiem that scales back on the production and instrumentation and allows Isaac's voice to shine, providing a reminder that The Fray are at their best when they aren't trying to be anybody but themselves.

Listen for yourself HERE, and sound off in the comments below.

You can purchase Scars and Stories here:

Email ThisBlogThis!Share to TwitterShare to FacebookShare to Pinterest
Labels: 48 To Go, Be Still, Heartbeat, I Can Barely Say, Live at Celebrity Beach Bowl, Run For Your Life, Scars and Stories, The Fray