Yuck at the Troubadour

If you are a regular reader of this blog, then you know what a huge fan of Yuck I am (more here, here, and here).  Its not very often that a new band comes along with a full album of solid tracks like Yuck's current album, so when I heard they were coming to LA to play the Troubadour, I jumped at the chance.
You can't see a band at a venue like the Troubadour without taking a moment to recognize the venue itself.  With so much music history packed into one tiny little room, the ghosts of music past become an extra band member for the night.

Notes About The Troubadour 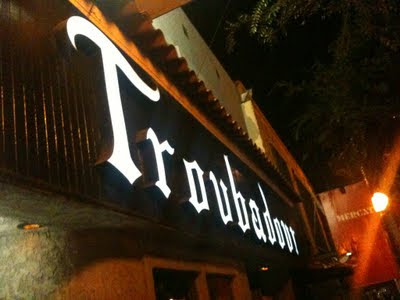 The Troubadour is one of those small, local, intimate venues that's been around forever and has seen everyone.  The stage is in the center of the room and feels a part of the crowd, instead of creating the normal separation between artist and fan.  Here, everyone's in the same room - a room that has witnessed some of the great moments in music history. According to their website, The Troubadour opened its doors in 1957.  Lenny Bruce was arrested for obscenity there that same year, thus beginning a storied history for this great venue.  Over the next 50+ years, The Troubadour witnessed moments in spades most venues hope to get once.  Artists like Buffalo Springfield, James Taylor, Carole King, The Eagles, Elton John, Tom Waits, Fiona Apple and Lilly Allen all got their starts in the US here.  Janis Joplin spent her last night here. "Killing Me Softly" was written about a performance here. Carly Simon met James Taylor here. Glen Frey and Don Henley met here.  The list of iconic moments goes on and on.

Seeing an up-and-coming band in such a storied venue felt somewhat paradoxical but made perfect sense by the end of their no-frills set.  Their setlist was extensive and almost encompassed their whole album, as well as their single Milkshake, a B-side Coconut Bible, and some new songs.  The performance was raw, uncluttered and sounded just as good as their album. 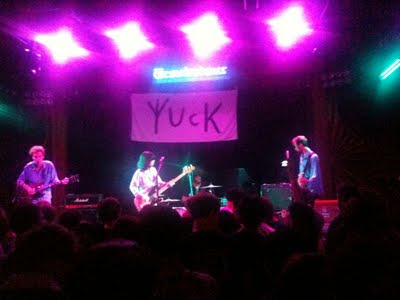 You can always tell how legit an artist is when you see them live, and when a band sounds like they do on their recordings (or better), you know you've got the real deal.  Aside from the fairly extensive guitar effects and some feedback stunts, the sound was stripped down, yet full through songs like The Wall, Shook Down, Georgia, Suck and Suicide Policeman. 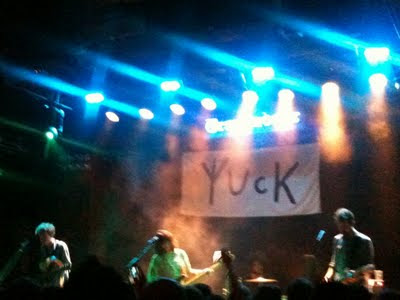 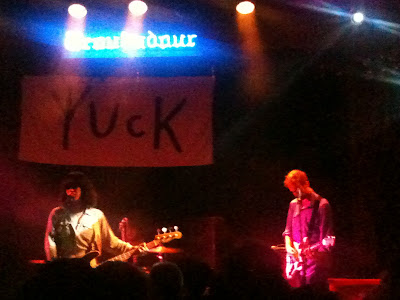 Yuck has mastered the notion of making something sound slightly familiar with their throwback-to-the-90's sound, but manage to keep it brand new and fresh.  Seeing them at The Troubadour, one can almost sense the presence of all past Troubadour performers meandering about, waiting to pass the baton onto those acts that are worthy. I'd say Yuck is on their way. 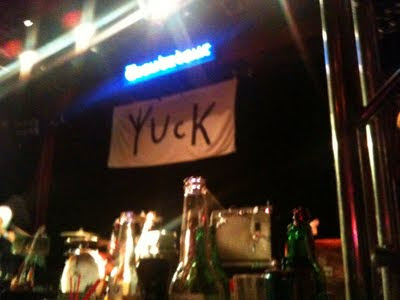